The name, Tokyo RPG Factory, brings a huge smile to my face. I have two favorite genres to immerse my game play. The first one being role-playing games or RPGs, mainly Japanese’s RPGS. The next is adventure games. Both genres are very similar with story-lines and characters that drive the game play. Which leads me to the recent game I got sucked into, I am Setsuna. This game is currently available, for download only, on PlayStation, PC and Nintendo Switch.

This RPG is a nostalgic spin to the power struggle of ever evolving game systems. Instead of buying into the bigger, better, strong branding that most current game buy into this turn-based RPG embraces the days of old. Setsuna pulls from beloved classic’s such as Chrono Trigger and Final Fantasy VII but without the low quality graphics and blocky character looks.

The scenery is set into a beautiful snow oasis, with snowfall gracefully dancing across your screen. It’s truly breath taking when you first take in the world of Setsuna, but as you make your way through the game you begin to realize that snow is all you will see, snow. Every area of the map is covered in snow or ice caves. This lack of variety in scenery was disappointing because most RPGS have a few different climates and terrains.

Once you achieve in getting your airship, there are a few small islands that you can explore. That said, I wouldn’t get too excited hearing about that, these islands for the most part were very lackluster overall. Some providing no extra game play or items to even make them worth visiting. One island was actually a small bonus added by the developers where you can enter a portal and speak to monsters that you would normally battle. These monster conversations are brief statements from the developers of the game.

Battles are easy enough, the monsters are visible on screen before they attack, which lets you see what kind of monster and how many you will be fighting. The battle system of this JRPG is a turn based battle system which uses an “Active Time Battle” system, which clings to the classic style of ‘90’s JRPG gaming. During battle, you are given the options of using Momentum, this boost your attacks and, Singularity, which randomly gives you combat effects. When you are in battle, you will only have access to three characters that are set in your current party. These characters will split the XP from the monsters battled. If you want a different character to level-up, you will have to adjust this in the menu under ‘Party’.

As with most RPGS, defeated monsters do item drops that you can use to obtain, Sprinite, which is where your magical abilities come from and your special attack abilities are called “techs.” You will also be able to sale these dropped items for cash, which is good because monsters don’t drop any kind of money and there are also no inns to rest/heal. Which just means you need to keep stocked up on potions, remedies and tent items, but no worry as you have deep pockets which allows you to carry up to 99 of each item in your inventory. 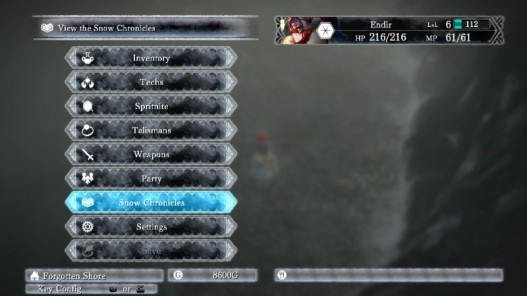 Overall the game is about 20 hours or so of game play which feels just about right for the regular story-line aiding in not dragging on or forcing you to grind your life away. However, this hinders the development of some of the characters and side quests. These two things are what most people who love RPGS want to see added and depth driven.

The characters of the game are your normal melee, mage and hybrid type characters you would find in any RPG. You have two main characters in the game. The first one being Endir, the mercenary who you will start the game as. This character is over all dull and lacking in development. He is the one who you use to find your next character, Setsuna. She is a cheerful and sweet girl who you are supposed to sacrifice so your party must get safely to the, Last Lands, to save all of humanity. To achieve this mission you need help, you pick up other characters along the way (Julieene, Aeterna, Kir and Nidr). These characters bring the world of Setsuna to life as you see all their flaws, determination and passion progress throughout the game. I found myself attached to each character, even Endir, and what their ending would be to this heroic yet sad tale. This draws from the themes poised throughout the game about grief, death and purpose. This left me asking questions as I played. Will all my characters make it to the Last Lands? Do I have to allow Setsuna to sacrifice herself?

After the final boss battle, you are sent into cut scenes that wrap up this beautiful, tragic and thought invoking story line. I would highly recommend this game for anyone who enjoyed classic style RPGS and JRGS. In the very hustle and bustle world we live in today this game gives you just enough time to step back and enjoy gaming again. With a bonus of the classic twist to the game will keep you wanting more. Which is why this message that Tokyo RPG Factory leaves posted for their fans warms my heart. I look forward to more of the games coming from this company, which is a small Square Enix owned studio. These games are definitely here to stay and remind us all of the ‘Good Old Days’ of classic RPG gaming. 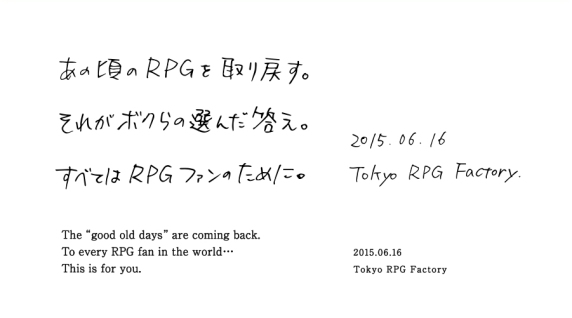